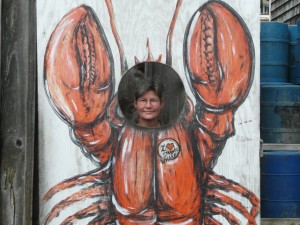 Hi! This page is a little introduction to my personal background. The image is now 11 years old and I should update it – and I will. However, the lobster is from my last trip to the US; a three weeks vacation in Maine, thus the lobster, and I find myself very attached to it.

My name is Patricia A. Buchtmann – the middle initial intended to indicate my American background, as my last name surely doesn’t. My German ancestor(s) immigrated to the USA from Goldenstedt, Lower Saxony some time in the 19th century (I have yet to find any records). Most German immigrants’ names were changed or the immigrants changed them themselves, for reasons of pronunciation or assimilation. Mine never did. I and nobody else knows why, as the name does cause inconveniences: in the U.S. we always have to spell it. A ch in the middle of an English word is pronounced /k/ – like in architect, but if the word or name is unknown, the ch gets turned into a ck or k.

Interestingly, in Germany I have similar problems and have to enunciate clearly or even spell it to avoid losing the – t – .

A few years ago, I realized that my American relatives had no idea that ‘Bucht’ actually meant something (bay).

I belong to those people who cringe at the question: Where are you from? because it is not answered in a few sentences. I had a student in one of my classes who understood the problem exactly and knew how I felt. We are both from military families, I from the US, she from China.

My parents met in Berlin in the early 60ies where my father, an air trafic controler with the US Airforce, worked at Tempelhof, the old airport that has been transformed into a wonderful leisure area.

Should you ever be in Berlin, take your inliners and go there to roll along the runways.

My mother is from Berlin, my father was born in New York City, but most of his side of the family lived in Closter, New Jersey.

I was born in West Point, New York State, christianed in Berlin, moved back to the US, Montgomery and Newburgh, New York State. My grandmother lived in New Jersey, where we stayed whenever my father was between assignments in the US. When he was between assignments in Germany, we lived in Berlin with my German grandparents. We moved to Wasserkuppe, Ramstein, Long Island… you get the picture.

As far as I remember, I didn’t mind the moving as a child. I didn’t have to do the packing 🙂 My mother eventually got fed up and left my father.

He, in the end, met and married a British woman, who originally was from Wales but lived in England, and her family became my step family, which kind of added a third language to my two.

So, to make things short, I was raised bilingually, grew up in two cultures and today refer to my German grandmother and my American grandmother whenever I talk about things related to ‘where I come from’.

I studied Linguistics at the University of Hannover and graduated with a Master’s Degree and two minor degrees in Literature and Sociology. (For more details on my academic background concerning my major subject Linguistics see introduction.) In Sociology, my main interest lay in the field of Medical Sociology, linguistic concepts and categories of body, health and disease and the development of scientific knowledge and ‘facts’ (Sociology of Knowledge). Strongly related to this is my growing interest in the link between food, disease, the food industry and the medical establishment (see posts in Food Talk).

I started teaching in adult education over 25 years ago with the VHS (‘Volkshochschule’) Ostkreis Hannover, which is a public institution for further education. A friend of mine was already giving English courses at the time and asked me if I would be interested in doing so myself. At that time, considering something like standing in front of a group of adults actually in charge of whatever was supposed to go on was a completely terrifying idea and I will never forget my first scheduled class session: it didn’t seem as if the group would be big enough to actually take place, and we were waiting for more to come. I don’t remember how the situation was eventually resolved, I just know that had the class been cancelled I’m not sure I would have ever gone into teaching. However, it did take place, and I have been teaching ever since.

After graduation, I got a little lecturing job at my university: Introduction to Linguistics. Introductory courses were always quite large, and needless to say, despite my experience at the VHS, again I was terrified. And again, everything went fine, and the course and I had a good time together. For my first university seminar I was quite happy to receive some positive feedback from one or the other student.

Today things have changed in a way I wouldn’t have thought possible when I was still in my twenties: that it is possible to totally overcome your shyness or self-consciousness or inhibitions when standing alone in front of a group. It’s just a matter of quantity – as with many things – the more often you do it the less difficult or frightening it becomes – and eventually you don’t have to imagine everybody naked.

(I read that performing in front of a group, for example giving a speech, is one of the major fears people have. Even those who don’t seem to.)

Today, after a four year stint at the University of Hildesheim, I teach English to adults on a freelance basis. I’m strongly affiliated with a language school based in Garbsen/Hannover (see below) that offers customized language courses to different companies, mainly though, insurance and reinsurance companies (and believe me or not, insurance can be more interesting than people tend to think). I also teach at the IPH – an institute that leads engineering projects in cooperation with industrial enterprises and at the School for Dieticians at the MHH (Medical School of Hannover).

This site uses Akismet to reduce spam. Learn how your comment data is processed.